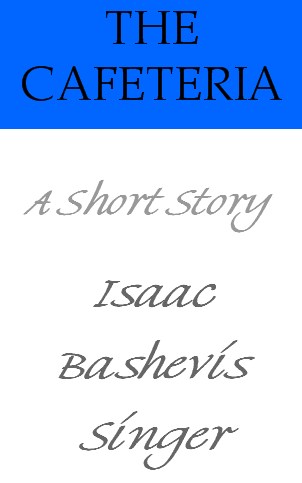 Even though I have reached the point where a great part of my earnings is given away in taxes, I still have the habit of eating in cafeterias when I am by myself. I like to take a tray with a tin knife, fork, spoon, and paper napkin and to choose at the counter the food I enjoy. Besides, I meet there the landsleit from Poland, as well as all kinds of literary beginners and readers who know Yiddish. The moment I sit down at a table, they come over. ‘Hello, Aaron!’ they greet me, and we talk about Yiddish literature, the Holocaust, the state of Israel, and often about acquaintances who were eating rice pudding or stewed prunes the last time I was here and are already in their graves. Since I seldom read a paper, I learn this news only later. Each time, I am startled, but at my age one has to be ready for such tidings. The food sticks in the throat; we look at one another in confusion, and our eyes ask mutely, Whose turn is next? Soon we begin to chew again. I am often reminded of a scene in a film about Africa. A lion attacks a herd of zebras and kills one. The frightened zebras run for a while and then they stop and start to graze again. Do they have a choice?
I cannot spend too long with these Yiddishists, because I am always busy. I am writing a novel, a story, an article. I have to lecture today or tomorrow; my datebook is crowded with all kinds of appointments for weeks and months in advance. It can happen that an hour after I leave the cafeteria I am on a train to Chicago or flying to California. But meanwhile we converse in the mother language and I hear of intrigues and pettiness about which, from a moral point of view, it would be better not to be informed. Everyone tries in his own way with all his means to grab as many honors and as much money and prestige as he can. None of us learns from all these deaths. Old age does not cleanse us. We don’t repent at the gate of hell.
I have been moving around in this neighborhood for over thirty years – as long as I lived in Poland. I know each block, each house. There has been little building here on uptown Broadway in the last decades, and I have the illusion of having put down roots here. I have spoken in most of the synagogues. They know me in some of the stores and in the vegetarian restaurants. Women with whom I have had affairs live on the side streets. Even the pigeons know me; the moment I come out with a bag of feed, they begin to fly toward me from blocks away. It is an area that stretches from Ninety-sixth Street to Seventy-second Street and from Central Park to Riverside Drive. Almost every day on my walk after lunch, I pass the funeral parlor that waits for us and all our ambitions and illusions. Sometimes I imagine that the funeral parlor is also a kind of cafeteria where one gets a quick eulogy or Kaddish on the way to eternity.
The cafeteria people I meet are mostly men: old bachelors like myself, would-be writers, retired teachers, some with dubious doctorate titles, a rabbi without a congregation, a painter of Jewish themes, a few translators – all immigrants from Poland or Russia. I seldom know their names. One of them disappears and I think he is already in the next world; suddenly he reappears and he tells me that he has tried to settle in Tel Aviv or Los Angeles. Again he eats his rice pudding, sweetens his coffee with saccharin. He has a few more wrinkles, but he tells the same stories and makes the same gestures. It may happen that he takes a paper from his pocket and reads me a poem he has written.
*
It was in the fifties that a woman appeared in the group who looked younger than the rest of us. She must have been in her early thirties; she was short, slim, with a girlish face, brown hair that she wore in a bun, a short nose, and dimples in her cheeks. Her eyes were hazel – actually, of an indefinite color. She dressed in a modest European way. She spoke Polish, Russian, and an idiomatic Yiddish. She always carried Yiddish newspapers and magazines. She had been in a prison camp in Russia and had spent some time in the camps in Germany before she obtained a visa for the United States. The men all hovered around her. They didn’t let her pay the check. They gallantly brought her coffee and cheesecake. They listened to her talk and jokes. She had returned from the devastation still gay. She was introduced to me. Her name was Esther. I didn’t know if she was unmarried, a widow, a divorcée. She told me she was working in a