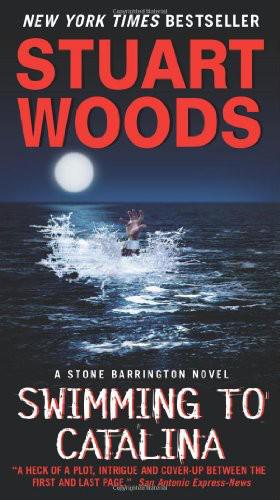 Prologue
The night was warm and lovely. To Stone Barrington’s right, the bloom of smog over greater Los Angeles was lit from within like a dirty lampshade; to his left, the lights of Santa Catalina Island twinkled like the eyes of a merry whore. Only a couple of hundred yards from where he stood, the anchor lights of dozens of small craft winked as the wake from the sports fisherman on which Stone rode caught them and made them rock. Stone took a deep breath, which was difficult, since one nostril was clogged by an allergy to L.A. air, and his mouth was sealed shut with duct tape.
“Christ, Vinnie,” the other one, whose name was Manny, said. “They’re right there in the tool box.”
“I’m looking, Manny,” Vinnie replied.
“Any kind of pliers will do—short-nosed, long-nosed—anything.”
“I said, I’m looking.” There was the noise of metal against metal as Vinnie rummaged through the tool chest.

“Jesus,” Manny said. “I’d like to get at a steak before the night is over.”
“I’m looking, Manny,” Vinnie said. Triumphantly, he held up the pliers. “I got them.”
“Give them to me,” Manny said. He accepted the pliers from Vinnie with one hand, while he held onto the length of three-eighths anchor chain with the other. The chain was wrapped twice around Stone’s waist. “Now hand me the shackle,” Manny said.
“This one?” Vinnie asked, holding up a large stainless steel shackle.
“Isn’t there a galvanized one in there?” Manny asked. “Stainless is real expensive; Oney will give us hell.”
“Like this?” Vinnie asked, holding up another shackle.
“That will do nicely,” Manny replied, accepting the shackle. “Come hold the chain for a minute.”
Vinnie came and held the chain while Manny unscrewed the pin and slipped the shackle through two of the chain links. Then he inserted the pin, screwed it finger-tight, and tightened it further with the pliers. “There,” he said, tossing the pliers at the toolbox and missing.
“Stone,” Manny said, “I’m going to have to ask you to hop a few steps toward the transom thing.”
Stone turned and looked at Manny as if he were an oversized, semiliterate troll, which he was. His ankles were taped together, and he had no intention of assisting Manny and Vinnie in their endeavor.
“Okay, okay,” Manny said. “Vinnie, grab an arm. Stone, it really would help if you would hop just a little.”
Stone sighed as well as he could through one nostril, then gave a hop and collapsed over the tool box,scattering its contents over the deck.
“Thanks a lot,” Manny said acidly. “You were a big help. Vinnie, hold him here for a minute.” He moved to the port side of the boat and dragged a seventy-five-pound Danforth anchor over to Stone’s feet. He rummaged among the tools scattered on the deck and came up with another shackle. “Where the hell did the pliers go?” he asked nobody in particular.
“There they are,” Vinnie said, pointing.
“Hand them to me,” Manny said. He took the pliers, shackled the anchor to the end of Stone’s chain, and tightened the pin. “I think that’ll do it,” he said, picking up the anchor and handing it to Stone.
Stone cradled the anchor in his arms like an overgrown puppy.
“Any last words, Stone?” Manny asked, then he and Vinnie burst out laughing.
“Any last words.” Vinnie chuckled. “That’s a good one.”
The two men muscled Stone over to the transom, which came up to his knees.
“Hold him right there, Vinnie,” Manny said, leaving Stone’s side and walking behind him. “I’ll handle this.” Manny grabbed a bolted-down fisherman’s chair for support and placed his foot in the small of Stone’s back. “Compliments of Onofrio Ippolito,” he said, then kicked Stone over the stem.
Stone was not prepared for how cold the Pacific Ocean was, but then, he reflected, he hadn’t been prepared for a lot of things. He let go of the anchor, then followed it quickly toward the floor of the sea, trying desperately to hold onto his final breath.

1
Elaine’s, late. Stone Barrington sat at a very good table with his friend and former partner Dino Bacchetti, who ran the detective division at the NYPD’s 19th Precinct, and with Elaine, who was Elaine.
The remnants of dinner were cleared away by Jack, the headwaiter, and brandy was brought for Stone and Dino. It was very special brandy; Dino had the bottle of his own stuff stashed behind the bar, and it
Vom Netzwerk: