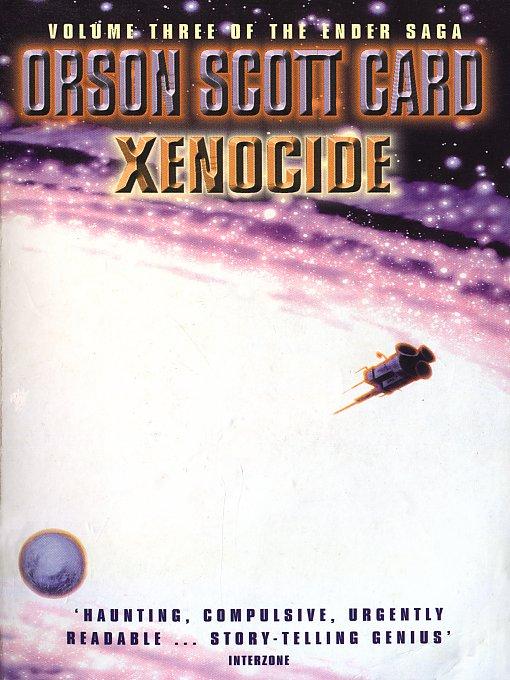 
A chance meeting with James Cryer in the Second Foundation Bookstore in Chapel Hill, North Carolina, led directly to the story of Han Qing-jao and Han Fei-tzu at the heart of this book.   Learning that he was a translator of Chinese poetry, I asked him on the spot if he could give me a few plausible names for some Chinese characters I was developing.   My knowledge of Chinese culture was rudimentary at best, and my idea for these characters was for them to play a fairly minor, though meaningful, role in the story of Xenocide.   But as James Cryer, one of the most vigorous, fascinating and generous people I have known, told me more and more about Li Ch'ing-Chao and Han Fei-tzu - as he showed me their writings and told me more stories about other figures in Chinese history and literature - I began to realize that here was the real foundation of the tale I wanted this book to tell.   I owe him much, and regret that I have passed up my best opportunities to repay.
I also give my thanks to many others: To Judith Rapport, for her book The Boy Who Couldn't Stop Washing, which was the source of the information about obsessive-compulsive disorder in this novel.
To my agent Barbara Bova, who called this book into existence by selling it in England before I had ever thought of writing it.   To my American publisher Tom Doherty, for extraordinary faith and generosity that I hope will all be justified in the end.   To Jim Frenkel, the editor who wisely turned down the first outline of this book when I offered it to Dell back in 1978, telling me - correctly - that I wasn't ready yet to write such an ambitious novel.   To my British publisher, Anthony Cheetham, who has believed in my work from the start of my career, and has patiently waited for this book far longer than either of us bargained for.   To my editor Beth Meacham, for being a friend, adviser, and protector through the preparation of this and many other books.   To the many readers who have written to me urging me to return to Ender's story; their encouragement helped a great deal as I struggled through the most difficult writing project of my career so far.   To Fred Chappell's graduate writing workshop at the University of North Carolina at Greensboro, for looking over and responding to the first draft of the Qing-jao storyline.   To Stan Schmidt at Analog, for being willing to publish such an extraordinarily long portion of the novel as the story "Gloriously Bright." To my assistants, Laraine Moon, Erin Absher, and Willard and Peggy Card, who, serving well in such completely different ways, gave me the freedom and help that I needed in order to write at all.   To friends like Jeff Alton and Philip Absher, for reading early drafts to help me ensure that this hodge-podge of characters and storylines actually did make sense.   And to my children, Geoffrey, Emily, and Charlie, for being patient with me through the crabbiness and neglect that always seem to accompany my bursts of writing, and for letting me borrow from their lives and experiences as I create the characters I love the most.
Above all, I give my thanks to my wife, Kristine, who has suffered through every arduous step in the creation of this book, raising questions, catching errors and contradictions, and - most important - responding so favorably to those aspects of the story that worked well that I found in her the confidence to go on.   I have no idea who I would be, as a writer or as a person, without her; I intend never to have occasion to find out.